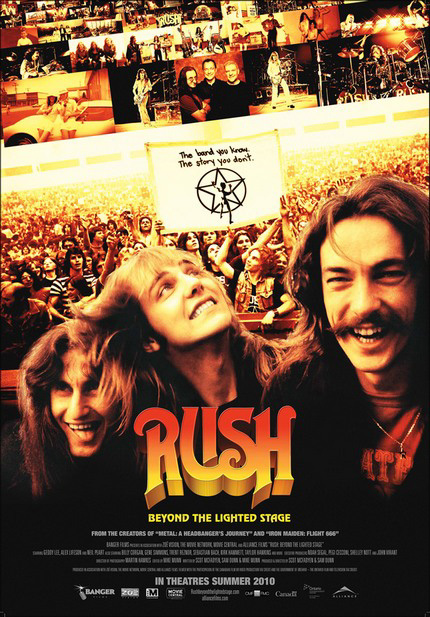 Rush: Behind The Lighted Stage

RUSH: Behind the Lighted Stage defines, debates and documents the roots of Rush. The Canadian power trio was originally formed in 1968, by bassist & vocalist Jeff Jones, guitarist Alex Lifeson and drummer John Rutsey in Willowdale, a Toronto neighborhood. Two vital personnel changes would eventually transform the unknown band into a global brand.

In September 1968, Geddy Lee replaced Jones on bass and lead vocals. By May 1971, Rush began establishing a foundation to build upon as en emerging rock band. Neil Pert came on board in July 1974, joining the duo just a scant two weeks before their inaugural U.S. tour. Original drummer John Rutsey who left Rush due to health issues passed away in May 2008.

Largely ignored by the media and rock critics during their early years, Rush built its fanbase by adhering to their own principles and touring as a working band for the working fan. Rush would establish itself through a word-of-mouth reputation. Pert's lyrics married to the musical scores of Lee and Lifeson would become a winning combination and serve the band well during the first phase of Rush albums.

Directors Sam Dunn and Scott McFayden have assembled rare archival performance clips of Rush on stage as well as highlighting the negative press the band received in multiple newspaper clippings that criticized Rush's work in the studio and on stage. The facetime the trio spend before the camera provides glorious details about the band in action, its development as a touring force and insight into the individual members themselves.

This documentary reveals an in-depth look at Rush as it struggled to find an audience at first before subsequently attracting and increasing their paid attendance figures into the sold out capacity concerts now commonplace on modern tours. The film shares the backstory of how Rush earned its critical recognition, loyalty among their hardcore fans, and the interpersonal relationships within Rush.

Candid commentary from those representing Rush's professional associations are showcased as well as plenty of musicians who are Rush fans. Personal opinions from Billy Corgan, Taylor Hawkins, Trent Reznor, and Gene Simmons discuss their views on the phenomenon and popularity of Rush. The unique humor of Rush exemplified by the band members humanizes them as musicians with intelligence and character.

The bond between Lee and Lifeson is inseparable depicted eagerly greeting fans on tour. Although Pert is still affectionately referred to as "the new guy" and prefers to keep his distance as a detached figure, the power trio are very much a cohesive unit of friends who continue to enjoy writing, recording and touring together as Rush.

The most compelling segment on Rush comes from the testimony of the band members discussing the personal tragedy experienced by Neil Pert who lost both his daughter and then his wife. Rush would enter a five year hiatus that originally signaled a possible curtain call on their musical career.

Pert took to the highways on his motorcycle to follow the open road. Sequences capture glimpses of diverse landscapes and terrain as scenic background while Pert rode on his solitary journey. Pert found a new wife and rediscovered his motivation to return to Rush. His personal triumph over intense loss is a tremendous victory for Pert.