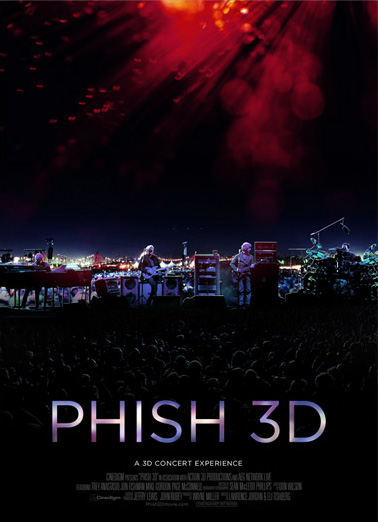 Phish guitarist Trey Anastasio was the responsible party for disbanding Phish following their 2004 effort Undermind. The four members went their separate ways leaving their legions of fans wondering about a future reunion of the Vermont group. 2009 saw a Phish revival complete with a new album Joy to celebrate their reunification as a touring unit.

Embarked on the third chapter of their career, Phish released a concert film Phish 3D that features highlights from Festival 8 held over three days in October 2009. The movie had a special screening on 420 underscoring the humor of the band. Phish 3D opens for a limited one week engagement nationally on April 30, 2010.

Phish 3D only includes four titles from EOMS, but all four rehearsal jams are tacked onto the end of the film during the closing credits. "Sweet Virginia", "Loving Cup" or "Ventilator Blues" would have been strong additions to the cinematic stage sequences. Thankfully, Phish has released the entire 2009 Halloween album cover concert for commercial consumption.

Phish does not exactly project a visually dynamic presence on stage. Their laid back attitude suits their jam band reputation, but that does not necessarily translate in a 3D environment for an engaging concert film. U2 3D showcased the stage movements of of its members, whereas Phish are rather sedentary in their appearance.

After minimal personnel changes, the current line-up of Anastasio, bassist Mike Gordon, drummer Jon Fishman and keyboardist Page McConnell was achieved in 1986. Their Dead-like status has contributed to their cult-like admirers traveling to catch their tour dates far and wide. Phish is a unique American phenomenon that concertphiles should endeavor to experience.