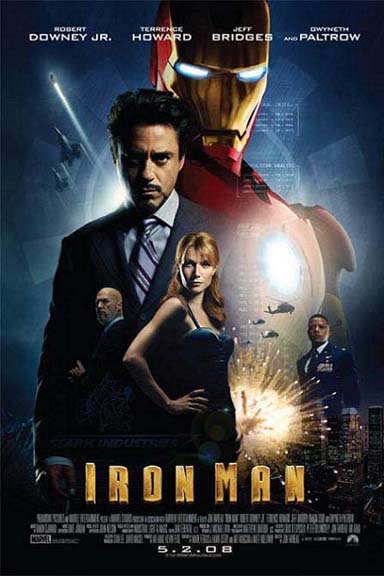 For film fans that have the option to see movies at a historic theater with an oversized screen, seeing Iron Man at the Senator Theatre actually enhanced the impact of this film. The sight and sound of the movie was projected in a super-sized presentation. Hands down, nothing beats the Senator for maximum viewing pleasure.

I AM IRON MAN indeed. Robert Downey, Jr., has never been better. His convincing portrayal of comic book character Tony Stark who transforms himself into Iron Man is an engaging epic. Stark is a wealthy, self-absorbed weapons manufacturer who lives a charmed life oblivious to his pleasure seeking playboy persona.

A close encounter with ragtag terrorists in the desert that attempt an ambush on Stark's life has a profound influence on his actions and radically alters his worldview. With dangerous shrapnel lodged close to his heart, Stark must now wear a protective magnetic cylinder in his chest to stay alive.

Following a daring escape from his captors, Stark examines his life upon returning home and encounters a pesky challenge in reorganizing Stark Industries. Jeff Bridges plays the antagonist, Obidiah Stane, a colleague of Stark's with an evil streak as wide as the Grand Canyon.

Marvel has had an uneven track record bringing its larger than life heroes and heroines to the movies. Daredevil, Elektra, The Fantastic Four, The Hulk, Silver Surfer, and The X-Men have all experienced varying degrees of success, but none captured the heights of the Spiderman trilogy.

Batman Begins appears to have influenced the creative efforts and execution of this film. Almost 20 years ago, Batman from 1989 trounced a series of action hero films featuring Dick Tracy, The Phantom, The Shadow, and Tarzan, which all failed to produce box office receipts in its wake. With any luck, The Green Hornet may finally be resurrected in 2009.

Directed by Jon Favreau, this modern tale of Iron Man, created by Stan lee in 1963, comes to life in a flying red & gold suit of titanium armor. The variables of a decent script, intense action choreography and fierce fight sequences all came together to produce a dynamic film. Iron Man is mature comic book fantasy that both adults and children can enjoy.

As big budget blockbusters films go, Iron Man has everything going for it. With Downey's troubled past behind him now, embodying the celluloid Stark is just the ticket Marvel needs to secure another profitable comic book adaptation to return in future sequel installments. Iron Man fans will have to remain idle for a while before the second segment flickers anew in a cinema sequel.