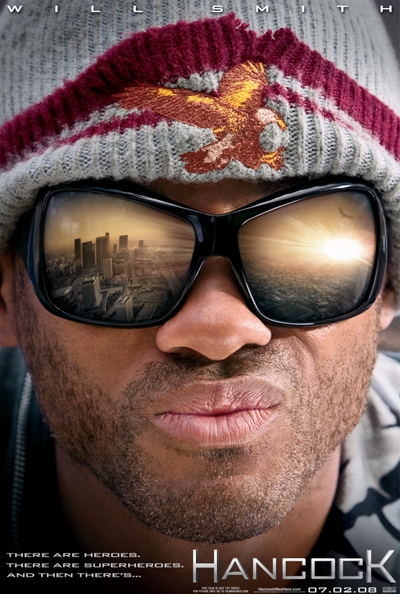 Gods, angels, superheroes. Mortals have always elevated the powerful beings they imagine exist to hero status. John Hancock is a hobo humanoid, adrift among the populace. Hancock has super powers, a sour attitude, and an empty bottle as his constant companion.

Will Smith is Hancock, the sloppy superzero with a super-sized chip on his shoulder. Jason Bateman shines as Ray Embrey, delivering a compelling performance as supporting actor. Charlize Theron plays his conflicted wife Mary Embrey. Eddie Marsan is Red, the dangerous bank robber who seeks revenge against Hancock.

Hancock starts off very strong with a decent premise. A Superhero with the reputation of being a pain in the meatus. Unlike the majestic Eagle that he emulates, Hancock is not entirely welcomed by the common citizenry.

Hancock arrests criminals and arrives to the rescue, but the average adult thoroughly objects to his disregard for public and private property. The local authorities have a laundry list of citations for the super-bad dude.

While rescuing a motorist stranded on railroad tracks, Hancock is befriended by Ray Embrey who offers a solution to his worn out welcome. Hancock eventually agrees to turn himself into the authorities to give the populace a taste of what life is like without him to save the day.

The first half of the film presents an amusingly fresh satire on the superhero film genre. Bateman is largely responsible for the swift repartee and glib humor. So what prompted this script to derail off the tracks? Uncomfortably, the movie abruptly segues into a weakened storyline.

Now alone with Mary in the kitchen, Hancock conveys an affection for her and she punches him with such force that Hancock and the refrigerator end up outside in the street. Mary reminds Hancock of his forgotten origin, and he learns that he is the last immortal male of his kind.

Mythology, aliens, and immortality? The peculiar twist that Mary Embrey and John Hancock were former lovers spanning across several centuries is mildly bogus. The novel concept of this unHero took an unnecessary wrong turn and labored to recover afterwards. Opposing feedback expressed from both the public and critics has generated differing opinions regarding this film.