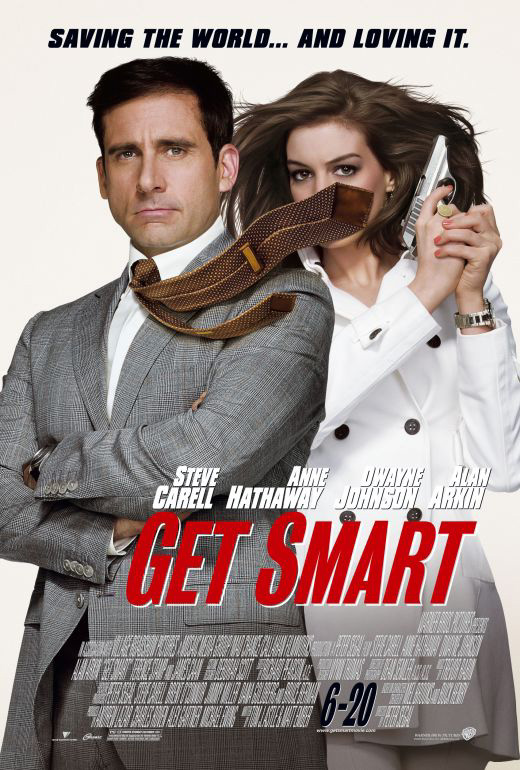 Get Smart with Steve Carell should have been a riot. Where is the comedic genius of "The Office" that Carell portrays on television? They don't write bumbling foils like they use to. Unfortunately, the producers of this film missed it by more than that much.

Max in the new millennium needs to Get Bent. To be fair, there are funny moments in the film, but not enough to salvage a genuine spy spoof like Max. How did Carell deliver a stale performance given a promising opportunity to reprise this role? An embarrassing script only generated disappointment.

Smart is a tedious Control Analyst looking to be promoted to field agent status. After submitting his eighth exam, Smart passed but is retained in his position by the Chief. When CONTROL Agents are compromised, Smart becomes Secret Agent 86. Smart teams up with Agent 99 to investigate suspected rogue activities of KAOS agents in Russia.

The cinematic return of Maxwell Smart is bursting at the seems with talent: Alan Arkin is the Chief, Terence Stamp is Siegfried, Anne Hathaway as Agent 99, and James Caan is The President. A good deal of the secondary characters from the series have been written into the modern movie.

However, comic elements of key characters are under utilized. Siegfried was wooden, malevolent and missing his harsh German accent. Siegfried may have been an arch nemesis, but he was funny too! Bernie Kopell, the original evil agent Siegfried from KAOS, graced the film with a brief cameo appearance.

Would you believe Carell puts on the famous suit and shoe phone attire worn by Adams and commandeers a red 1965 Sunbeam Tiger? Get Smart is simply unable to match the subtle humor of the popular series. The end credits include For Don Adams & For Edward Platt.

Background about the movie online reveals the budget spent to produce this film reached $80 Million USD. Are they for real! Spending that vast amount of capital to squash all the funniness in this production could have been better spent on easing the current mortgage crisis striking homeowners across the nation.

The original "Get Smart" is now available on DVD. There's a scene in the series wherein Siegfried has Agent 99 tied up. Siegfried says, "I'm repelling", and 99 replies, "You certainly are". "Watch it 99", is Siegfried's response. This repartee is super-funny. Brooks & Henry were listed as consultants on this film. Their professional input must have been in name only.